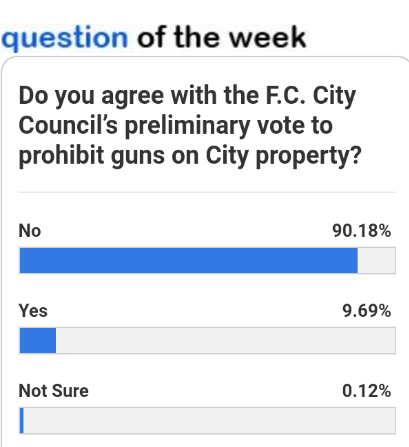 The Falls Church City Council Plans to move ahead and pass its most restrictive version of its gun ban despite the outcry and opposition from the community and without call in voice live public comment.  It appears to many in Falls Church that the City Council is going for a two for one, passing a law that violates rights protected by the 2nd amendment while not listening to folks as provided by rights protected by the 1st amendment.  The City Council is willfully not using technology the city has access to so that the council will not have to hear the live voices of its residents that clearly stand in opposition to this ordinance.

On Wednesday, August 5th, Falls Church City Chief of Police Mary Gavin took calls from citizens in a live Community Conversation on Police Reform. The event posted on the city website included an invitation to “to request a Zoom invite, please email …“  Clearly the city has the technology to hear live from the people for whom they work, they just don’t want to hear from the residents of City of Falls Church on this one.

A post in the social Networking App Next Door shared the following:

This is how public comment will work at the Falls Church City Council meeting, Monday August 10th: If you want your letter read in its entirety during the public comment period for this issue you will need to send your email to the city clerk AFTER the mayor calls for public comments to be emailed to Celeste at cityclerk@fallschurchva.gov .

1) Draft an email to CityClerk@fallschurchva.gov with your comments, but do not send yet.

Of course you can still email the council members, the city clerk and the Falls Church City Police Chief Mary Gavin with your views before the meeting.  However, those emails will only be summarized but they will be counted.  However if you want to participate in the so-called “Public Comment” being offered by the Falls Church City Council you will have to follow the directions above.  More information can be found here.  http://www.fallschurchva.gov/PublicComment

Writers are encouraged to communicate respectfully.  Inappropriate comments or personal attacks are not helpful and will be used to characterize all those who support the individual liberties protected by the second amendment.  Please do not stoop to the level of those on the other side of this issue.

The meeting can also be viewed on FCCTV which is available on Cox channel 11, RCN channel 2 and Verizon channel 35.