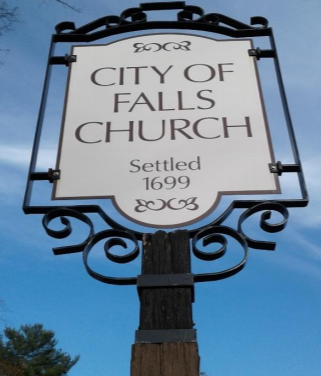 The Falls Church City Council has posted its agenda for the July 27th City Council meeting. They are calling for first reading for the gun ordinance.  They are fast tracking this legislative effort with no discussion on the Committee level and moving to first reading under the cloak of COVID 19.

The meeting is scheduled for July 27th 2020 – 07:30 PM  and if you want your letter read in its entirety (or for your three minutes) you must specifically ask that it be done that way instead of summarized.  Direct emails to

New restrictive gun legislation dominated the most recent legislative session in the Virginia General Assembly and a slate of new gun control laws took effect July 1st in the state of Virginia.  This debate however is coming to the City of Falls Church as one new law allows city councils to ban guns in city government owned buildings and land, areas such as recreation or community centers, public parks, or outdoor areas being used during permitted events including adjacent streets to said event.  The City Council has this issue on the agenda for the upcoming work session on Monday July 20, 2020.

The issue of guns is personal and contentious.  Like the issue of abortion, almost everyone has an opinion about it. However, unlike abortion, the right to bear arms is enumerated by our constitution.  Abortion rights are not as clearly delineated and deemed a right via an interpretation of the penumbras of other constitutional protections from several amendments to the constitution. Also like the issue of abortion, when the issue of guns is discussed one can almost find two viewpoints talking over each other as if it were about two different issues altogether so it is not often easy to discuss this much less find a middle ground.

Some people think this is more about a political agenda than the safety of citizens in Falls Church.  As an intellectual and academic community there is an expectation that the council would be able to provide and base any decision on accurate information pertinent specifically to our community.  Using biased spun data isn’t helpful and the slides made available  from work from the city, present information (see slide on page 4) that spans a 17 year period and also includes other local jurisdictions.  The biggest number on the chart on statistics for Firearm Related Incidents for Falls Church and these neighboring jurisdictions, is for incidents involving BB guns (50).  Robberies are next at 36.  How likely are those robbery criminals to be deterred by any local ordinances? We need data for firearm related incidents on the city owned property as is being proposed by this ordnance.  That is what we need to look at. 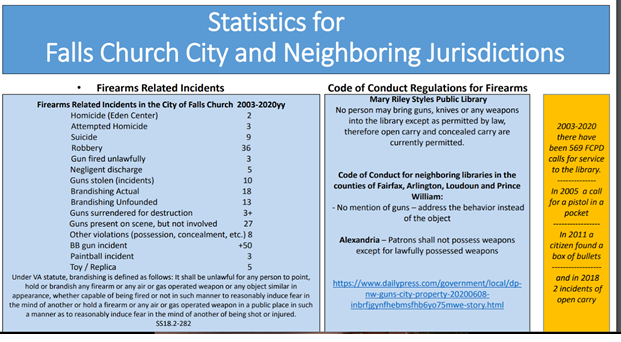 The chart spans SEVENTEEN (17) YEARS and doesn’t provide a yearly breakdown. It omits the locations of these incidents so it is not clear how many of these took place on city property if at all.

Considerations for the Council

What is the potential cost to city tax payers?  The City Council needs to be upfront with the citizens about the potential cost to the taxpayer should the city pass restrictive gun ordinances that will in all likelihood face a constitutional challenge.  The litigation costs defending the City ordinance can be estimated to be on the order of $250,000 or more according to other localities who have discussed this cost concern.  Are the citizens of Falls Church City ready and willing to fund such costs?

Signage would then need to be produced for every public entrance and egress to any city owned building, park and community recreation center.  The city council needs to be upfront about these costs and each take a public stance as to why this expenditure, during these times, is a priority over so many other needs.

Will the city be providing extra security and police presence at these public places and events now that law abiding citizens are now left defenseless should an incidence of violence occur.  Is the city accepting individual liability should an incident occur?  What will be the cost for metal detectors for all the public entrances in order to enforce this ban?

Target of this proposal

The Alexandria City Council recently passed a ban including not just open carry but conceal carry as well on government owned property.  How will law abiding citizens know, as they depart a restaurant, which parking lot is government owned and how will they lawfully traverse to their vehicle?  Are we prepared to give cause to making an otherwise law abiding citizen a criminal?

How will this proposed ordinance in fact make us all safer?  The data point that is quoted by council member Letty Hardy refers to statistics that state, “The data from the past 10 years shows that 10% of mass shootings occurred in gun free zones, with the majority happening in private homes.)”  Taken at face value of that statement, how does it make the citizen’s of Falls Church safer in fact, by increasing the size of this 10% zone and leaving law abiding citizens defenseless should some incident occur in a setting where they might have been able to carry a weapon to provide their own protection?  Looking at the above mentioned chart, what category of firearm related incidents would this ordinance impact and therefore using that data point what is the relative risk to our community that would be lowered by this ordinance?

Many of these new gun laws are referred to using the term “common sense” gun laws so there is interest in understanding what would be common sense about this.  As the Council begins its deliberations about this proposal, many citizens in Falls Church are tuned in looking for the logic and the data that would supports its passage.