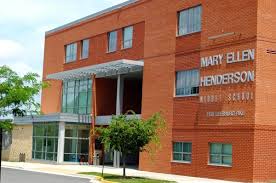 By Justin Jouvenal May 11 at 7:00 AM Email the author
A probe that began with reports of nude photos of students circulating at a middle school has mushroomed into a sexting investigation involving nearly a dozen students at two schools in Falls Church, Va., according to a search warrant.No one has been charged in the case that centers on Mary Ellen Henderson Middle School, but investigators with the Falls Church police have recovered multiple explicit images, discovered some were posted on social media and learned one high school student appeared topless during a live session on Instagram, according to the search warrant.The case provides yet another window into the pervasiveness of sexting among teens and a sobering reminder of how quickly explicit images can travel among students in the age of smartphones and social media.Under Virginia law, teens who sext can be prosecuted using the state’s child porn charge, a felony that carries a minimum five-year sentence. In practice, however, such cases more often end with a plea to a lesser charge.

“The City Police Department believes that the health and welfare of all children and teens are very important,” Falls Church Police Chief Mary Gavin said. “We are taking this investigation seriously and are being sensitive to the ages of the students in this case.”

Investigators wrote that the probe began on April 26, when Henderson’s assistant principal reported to a school resource officer that two students had been filmed fighting in mid-April and that nude pictures were being shared by students.

The assistant principal also said a male student had recently broken up with his girlfriend, who had sent him a nude picture of herself before they split, according to the search warrant. Since no one has been charged and juveniles are involved, The Washington Post is not naming the students.

The school resource officer interviewed the male student, who said he had sent his then-girlfriend a photo of his penis taken with his phone, according to the search warrant. In an interview, the girl told police she had sent a nude image of herself to the boyfriend.

After the pair had broken up, the ex-girlfriend sent the image of the male student’s penis to a second male student via Snapchat, according to the search warrant.

The school resource officer interviewed the second male student, who said that after he received the photo he posted it on Snapchat for about 10 minutes, according to the search warrant. The second male student told investigators that other students may have taken screen shots of the photo while it was posted on the social media site.

The second male student said the latter photo was of a ninth-grader at George Mason High School in Falls Church and told police he received it from a third male student at Henderson, according to the search warrant.

In all, investigators seized five student phones, which were examined forensically for evidence.

A school system spokesperson did not respond to a request for comment.

There have been a number of high-profile cases of students at Northern Virginia schools sharing explicit images in recent years.

The same year, Manassas police generated controversy by obtaining a search warrant for a photo of a teen’s erect penis as part of a sexting case between minors. After an outcry, the request was dropped.

The rise of sexting has prompted various attempts by state legislators to make sexting among minors a misdemeanor rather than child pornography, but the bills have never made it into law. A number of other states have passed such laws.

Jonathan Phillips, a former Fairfax County prosecutor who has handled many sexting cases as a defense attorney, said it’s time for Virginia’s law to change, too.

“The tide has continued to move in the right direction on a national level, but that hasn’t happened here,” Phillips said. “There still needs to be an answer for cops, prosecutors and parents who are going to court that is not a felony.”

Justin Jouvenal covers courts and policing in Fairfax County and across the nation. He joined The Post in 2009.