The Falls Church City Council tonight at 7:30 p.m. is taking to first reading proposed language for a gun ban ordinance in the little city of Falls Church, Virginia. The city wide ordinance would prohibit the possession, carrying or transportation of any firearms, in public buildings, parks, recreation and community centers and street events where events or rallies, requiring permits, are taking place and to include the streets, public alleys and sidewalks adjacent to those events.  This would also include ammunition, or components or combination thereof in said spaces.  It will not make an exception for law abiding citizens who possess concealed handgun permits issued by the State of Virginia.  Council members indicated, in the work session on July 20th, a desire to make violations a Class 1 misdemeanors punishable by up to a year in jail and a $2,500 fine.  They agreed to push it to first reading, even before the wording of the ordinance had been released or decided or seemingly even in front of them. 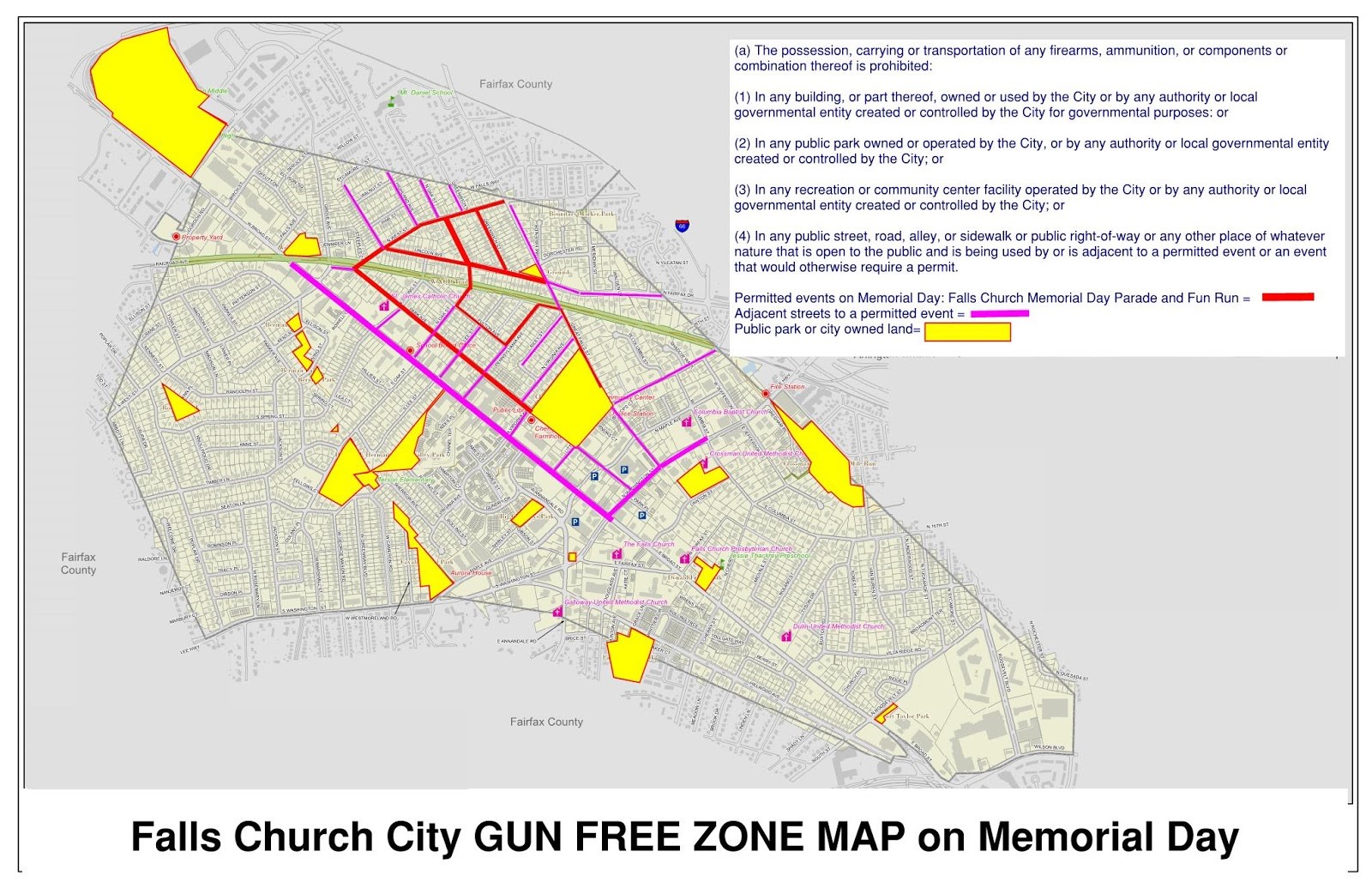 Outraged citizens took to social media to express their disapproval for the ban that would impact their  2.2 square mile community, known for its exceptional low crime rate, where the biggest firearm offense is listed as an incident with a BB gun according to the data provided by the city at the work session.  Over a 17 year period the city has had only 2 reported murders, believed to be gang related, and they took place at the outer edge of the City at the Eden Center in 7 Corners.   On Friday July 24th, resident David Kutchma created a post on the social networking app, Nextdoor, alerting residents to the Council’s intention. Most residents were alarmed by this proposal and the post quickly received over 200 comments with a majority opposed to the ban and by this writing it has over 275 comments mostly in opposition. 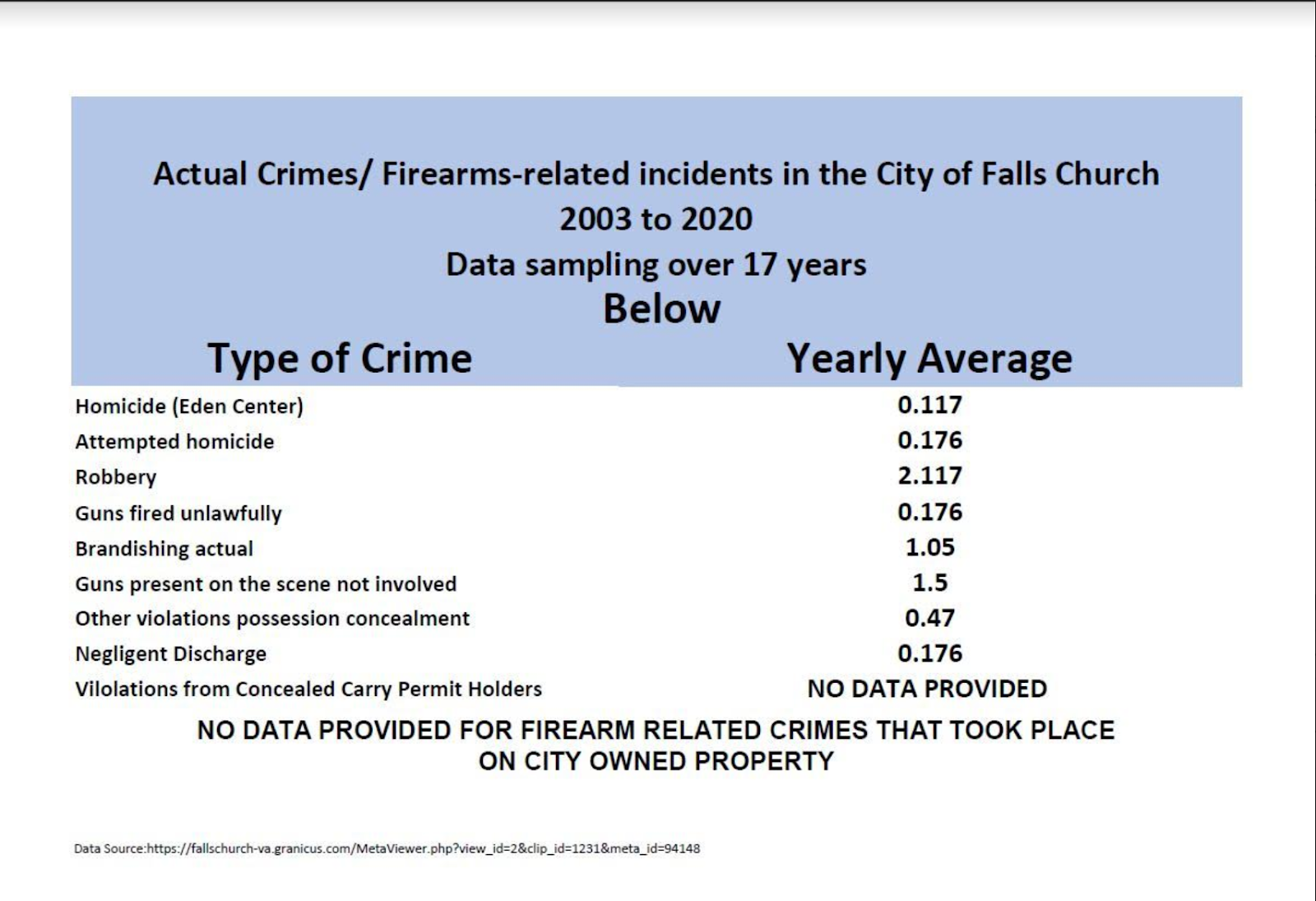 Outrage grew as it became clear that the council will take this up while at the same time not allowing for live public comment.  Alexandria and Arlington both were able to offer citizens live commenting via video feed.  Falls Church City staff maintain that it is not possible in Falls Church City.  Council member Letty Hardy, a strong proponent of this ordinance, in a response to a comment on her July 24th post on her Facebook page, stated that “The city clerk has been diligently managing public comment since we moved to a virtual meeting format in the spring, which meets open meeting law requirements. It’s unfortunate the current technology doesn’t allow for live public comment but every comment sent to cityclerk@fallschurchva.gov (or transcribed phone call) is logged into public record and sent to the full City Council.” The July 20th work session allowed for live participation by the land developer and others.

One citizen has organized a petition against the ban and results by Sunday night had been sent to the city clerk.  The petition, found at www.fallschurchgunlaw.com is still circulating throughout the city.  Letters began to pour into council members and Falls Church FACTS, a Falls Church based website, created to share factual information with city residents, posted an article http://fallschurchfacts.com/new-local-gun-laws-consideration-falls-church-city/ that has over 50 comments, at this writing all in opposition to the ban.

The Monday night work session lasted for over three hours, with the gun ban discussion starting at 2:57:2, after a very thorough and detailed discussion about the number of parking spaces that would be available to city residents at a new development project at Washington and Broad street. The council made clear its intention to capitalize on its authority, given to them by the passage of HB421, that gave localities the authority to restrict guns in their own municipalities.  Council members voiced a desire to mirror what Alexandria City passed in June of this year. Their law took effect July 1st.  Few questions were asked about the gun ban language that sets up the city of Falls Church for a potential constitutional challenge which citizens would have  to pay to defend which other localities estimate to be on the order of $250,000.

In a time when the nation is learning, reflecting upon and addressing our racist history, one anonymous commenter wrote “ Banning weapons is the most white privildge (sic) idea ever. Rich liberals scoffing at the idea that a person might need to defend their own life is a tower so ivory you can’t look at it in direct sunlight. It’s the personal safety equivalent of “just have the maid do it.”  The comment provided income data from Falls Church City, as “Average Household Income $181,724.00 and Median Household Income $124,796.00, concluding “This ordinance fits this city and those who vote for it.”