Founders Row Moves to a Vote. The Time to Weigh in is Now.

Editor’s Note:  While many of us in Falls Church City have been on summer mode, a small cadre of involved citizens have been following the Founders Row project closely; for years.  They’ve attended meetings, taken notes and shared information via email to a list of other citizens.  Thanks to their involvement, many of us know more about Founders Row then we would have.  Now it’s time to tell the Planning Commission and City Council your thoughts. 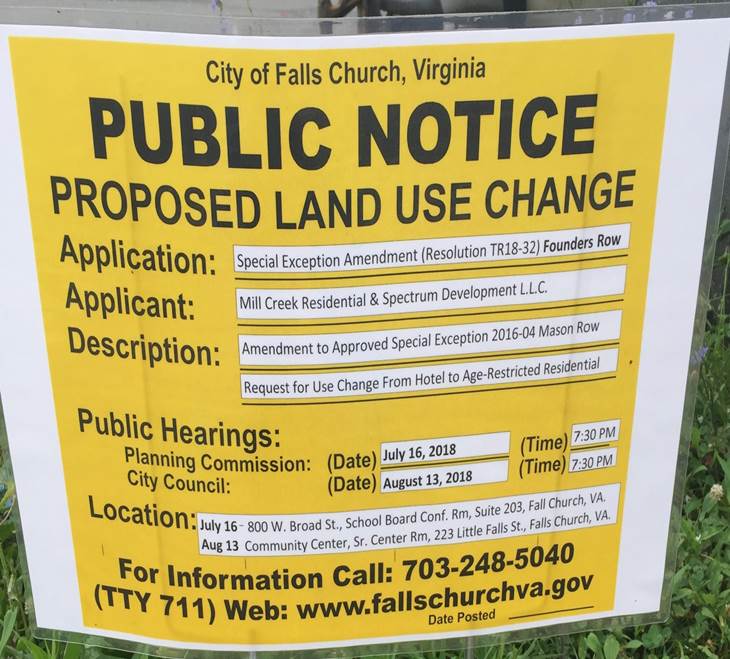 The Planning Commission should hear your comments on the overall look, feel and flow of this project, prior to approving the site plan.  (Architectural elevations, landscaping plans, and more are on the City’s web site)  City Council should hear the concerns and thoughts on the amendment* requested from residents who occupy all parts of the City, not just those who live on the streets closest to the proposed site.  New voices are necessary, as it is possible (probable?) they no longer hear the words of those who have been speaking out the loudest and longest.

What is decided for this particular project could influence decisions made for future projects (to include the West Falls Church property).

If you cannot attend as you will be out of town or have other commitments, please send your comments to both the Planning Commission and the City Council.  The web site does not list individual email addresses for the commissioners; address comments regarding the site plan for the commissioners to review to plan@fallschurchva.gov. Your comments will be included in the package distributed the Thursday or Friday before the Monday meeting.

*The amendment requests removal of the second anchor – the hotel – from the design and converting that space to 72 age-restricted apartments plus reducing the number of parking spaces provided for the entire project while keeping the special exception granted to build up to 85 feet in height.  Modifying the hotel to apartments causes the ratio for this project to go from 32% commercial/68% residential to 17.5% commercial/82.5% residential on a prime piece of commercial property on one of the two main roads in the City.