What Happened with the Performing Arts Specifications for The New FCCPS George Mason HS?

The Falls Church City community has always been told that there would be ample opportunities for input into the design of the new school and that the design process would be transparent.  The recent community discussion about the auditorium, the changing size of the stage and the news that there will be no full fly rigging system has brought these promises into serious question. Many in the community would really like to understand the decision making process associated with the development of not only the footprint for the Performing Arts Space but details about the space itself. By reviewing the proposal documents it looks like decisions were made that did not take into account the community feedback. 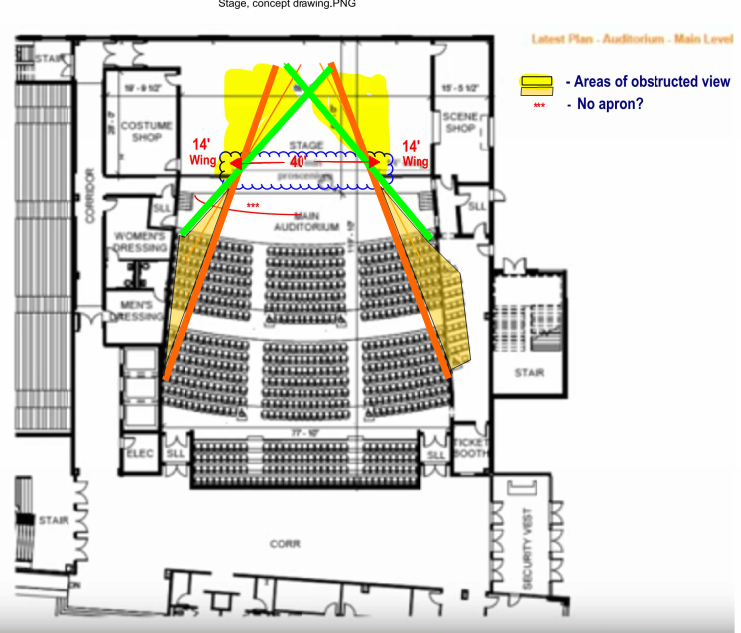 Input from so called “stakeholders” last December 17, 2017, documents the concern about the size of the space and the desire for a full fly rigging.

Further, while changes seem to have been made or are represented to have been made, it is difficult if not impossible to track the changes in the available posted documents.  Presentations by school leadership do not provide clarity. As recently as October 16, 2018, at a school board work session Superintendent Dr. Noonan stated, interestingly reading carefully from prepared remarks, that teachers have been involved from the start. However despite the fact that staff did share their thoughts with regard to stage size, that input was not heeded in the original building footprint which seems to be the problem.

Drawings shown at the October 16 work session appear to have the stage now down to 40’ X 40.’   That hardly seems consistent with notes from a meeting with staff in January of this year where, according to the notes, that  staff members were asking for a stage of similar size to what they have now or 65 x 40.  By his own admission, Dr. Noonan, in this same work session retraces the timeline and references a December 2017 meeting where Shawn Northrip, Theater teacher at GMHS was disappointed to learn there would be no full fly rigging (and we believe no ceiling overhead height to accommodate that)  so it is hard to follow how staff had real input into the design before decisions were made. It is also hard to follow that changes have been made, what the new specifications actually now include or provide when the revised RFP still has the same language as before with regard to the fly or stage rigging.

The reasons against a full fly rigging we are hearing are safety concerns, VDOE recommendations, possible cost and loss of classroom space.

As Planning Commissioner Melissa Teates so astutely points out in comments made to the Falls Church News Press, Virginia State Department of Education’s specifications come in the form of recommendations, only, and not mandates.

According to Gordon Theisz, who has been closely following these plans, the problems are related to the size of the theater. Given ⅓ of the main floor (the other ⅔ are occupied by two gyms) the theater is simply not wide or deep enough to accommodate the seating and performance needs simultaneously.  A wider stage (60’) allows for a larger band to perform but severely limits off stage production space including “technological” solutions to compensate for the absent fly and for set changes. A narrower (40’) stage provides the space for these, but limits the performance size and impacts sight lines severely.  A deeper stage (50’) provides for cross stage movement but limits seating capacity potentially to less than our current theater while a shallower stage limits production and while increasing seating. There is seemingly no interest in expanding the theater dimensions or the footprint of the building even though a shovel has yet to hit the ground.

Ultimately the insistence of City Council to re-develop all 10 acres allowed by the agreement with Fairfax County shoehorns the high school onto a tiny footprint. This current footprint limits the theater space so the community will not be seeing the Performing Arts space it was expecting, there is no room for future growth, and parking options are severely limited on the campus.

Falls Church Facts is seeking answers to to many questions not the least of which are:

Editor’s Note: For Further Reading: In an effort to understand the decision making process a timeline of events has been drafted which is still a work in progress. You may read it here and check back as we add information as it known to us.  If you have details to add please comment and/or email us at Fallschurchfacts@gmail.com