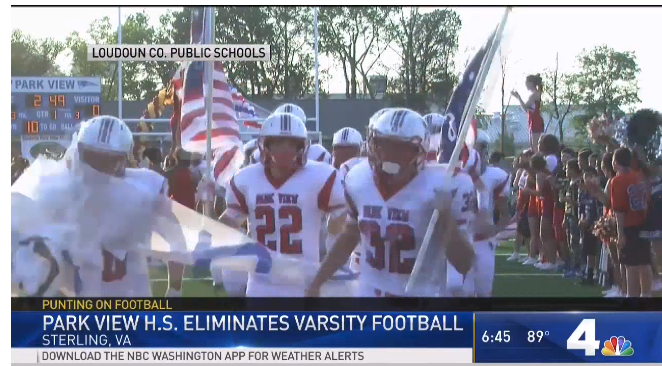 Loudoun County Park View High School has eliminated its varsity football program for the upcoming fall season.   While Park View’s program was eliminated primarily due to lack of interest, safety concerns were part of the decision. News of this article lead immediately to discussions on the topic of CTE  “chronic traumatic encephalopathy.”

A study led by Boston University, published in January of this year, showed that it is hits to the head not concussions that cause CTE.   These hits, according to the study and reported by local news anchor Doreen Genzler with NBC4, “can lead to suicidal thoughts, mood swings, sleep disorders, depression and more, years after the actual injury.”

The benefits of high school athletics are well known as is how football in particular is very much a part of the fabric of local communities all across this country. Falls Church is no exception.  Falls Church City Public Schools’ former and long serving School Board Member Kieran Sharpe mentioned these safety concerns on several occasions during school board meetings during his tenure on the board. However this never led the board to ever seriously considering cancelling the Football program for the George Mason High School (GMHS)  Mustangs.

The GMHS athletic program staff take safety very seriously.  Under the leadership of Mason’s highly accredited Athletic Training Coordinator, Vicki Galliher, George Mason has put in place strict safety protocols.  As any student athlete that has taken a hit can tell you, try as you might, no one returns to the field if not cleared by Galliher.

More about the study can be read here.